L.A. Music Sessions is a music production/services company based in Los Angeles. We cater to international artists, producers, songwriters and composers, signed or independent, who want to add prestige and take their work to the top level.

We have access to Grammy™ and Multi-Platinum winner musicians, vocalists and sound engineers who will turn your music project into a top 10 hit or an orchestral masterpiece – all at competitive rates!

Traveling to Los Angeles, including hotels and restaurants costs, can be an expensive endeavour, that’s why we offer the possibility to collaborate online via videoconference and file exchange, taking advantage of today’s high-speed internet technologies available.

The Los Angeles music industry is a super-busy environment; it can be very challenging to organize recording sessions. We take good care of that.

We work on complete and on partial projects – from rhythm sections to entire orchestras, and on all kinds of styles and arrangements.
Whatever your project needs, L.A. Music Sessions will provide the perfect sound …the L.A. sound!

In summary, the step-by-step process:

Your artistic expectations can be fully achieved in collaboration with world renown professionals who perform and record for international pop stars.
Talent, passion and prestige for your music projects.

Preparing recording sessions and making sure everything works smoothly, can be a daunting task.
We take care of all the organizational aspects in every detail, so that our clients can fully and solely focus on music.

While we still love working with vintage gear, we fully embrace of the opportunities offered by present technology to provide an amazing virtual studio recording experience.
From L.A. to your studio or home on the other side of the world.

Proudly introducing some of the professionals who have recorded for L.A. Music Sessions

Russ is internationally known as one of the top drummers of today.
As a Multi-Platinum recording artist, he has played on multiple Grammy® award winning recordings with combined sales of over 26 million copies. 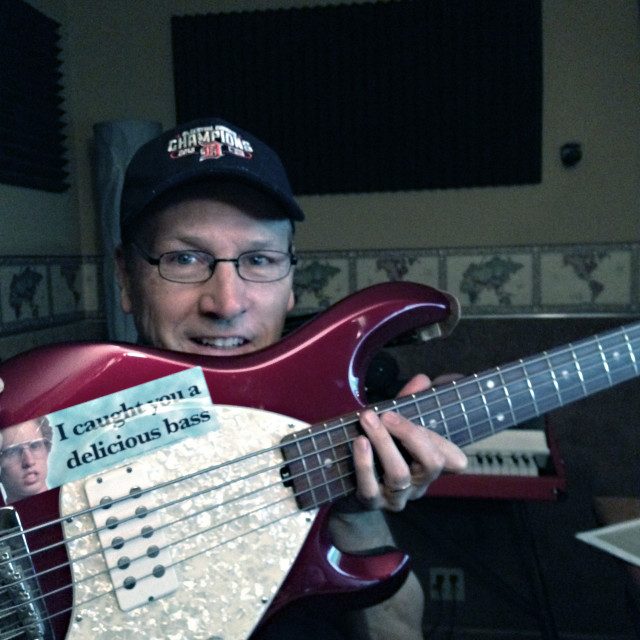 Matt has started his professional career back in the 80's with jazz trumpeter Maynard Ferguson. Then he was part of the David Lee Roth band with Steve Vai and his brother Gregg on drums. 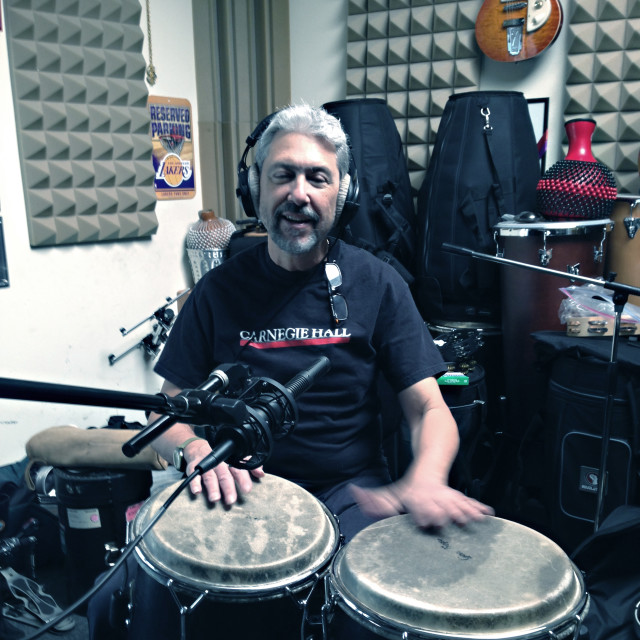 Born in Santiago, Cuba, Luis moved to Los Angeles when he was a teenager and his career eventually took off to international stage in the 80s to the extent that he has become one of the most sought after percussionists in the world.

"Music is given to us with the sole purpose of establishing an order in things, including, and particularly, the coordination between man and time."

What we offer... but not limited to!

We have access to a variety of composers for your needs. From dance, pop, rock, to soundtrack and custom music for backgrounds.

We record from select studios. Sessions can be followed by videoconference. Clients can interact as if they were in studio with us.

A final, yet critical, stage to add cohesion to a music project. Optimizing your mixes and making them sound just right. 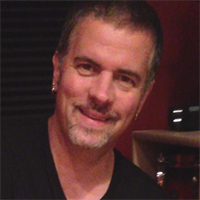 In studio with drummer Russ Miller 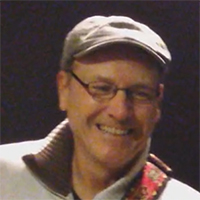 In studio with bassist Matt Bissonette 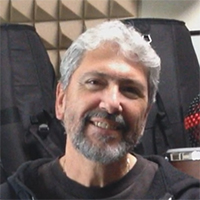 In studio with percussionist Luis Conte 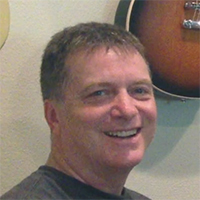 In studio with guitarist James Harrah 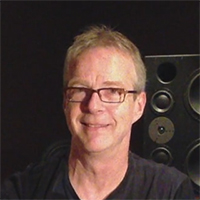 At the Universal Mastering Studios™ with engineer Pete Doell 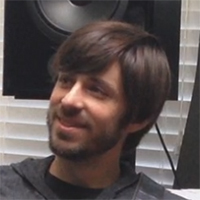 In studio with guitarist Andrew Synowiec 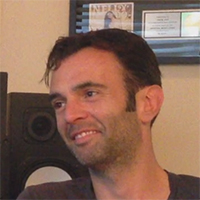 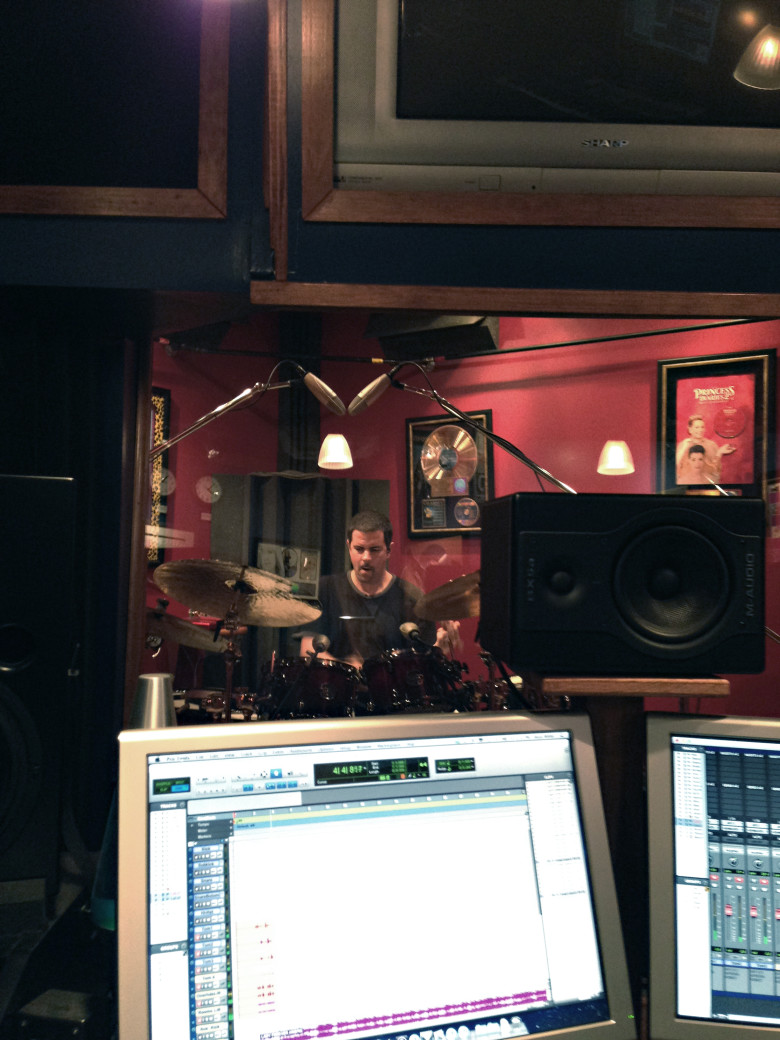 During a recording session with Russ Miller.

Other than being a wonderful drummer, Russ is expert on tech stuff and developed the subkick with Yamaha.

We spent quite some time to find the right sound for the project we were working on with great results! 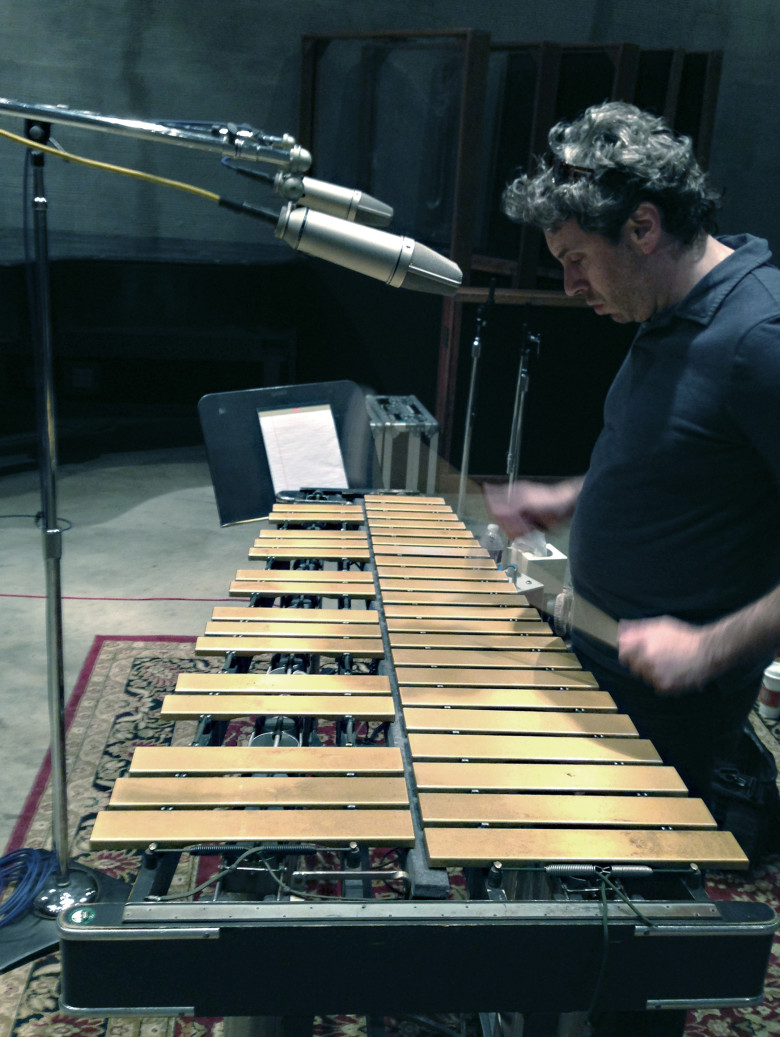 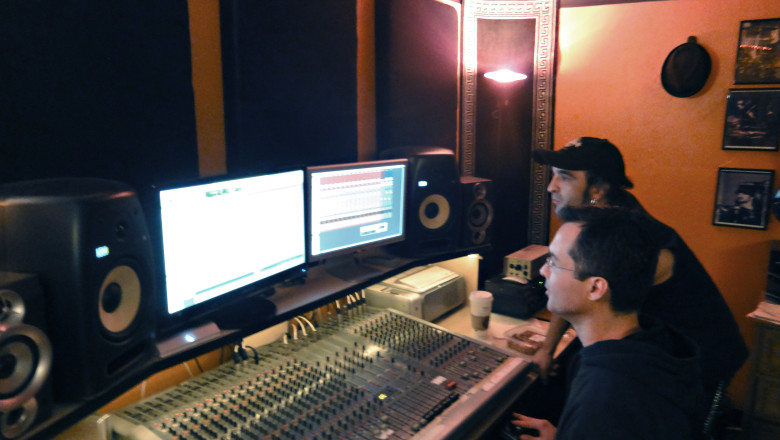 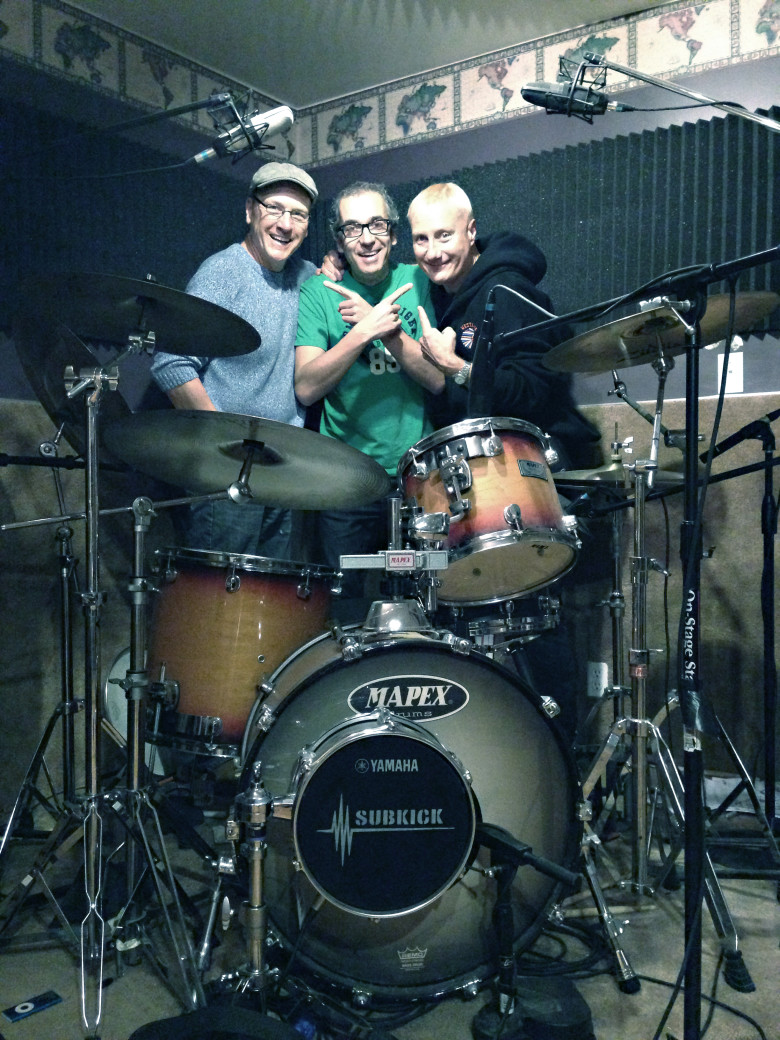 The Bissonette brothers have been playing together since they were kids. They’ve been recording and touring together with many artists, one in particular David Lee Roth back in the 80s. A remarkable rhythm section. 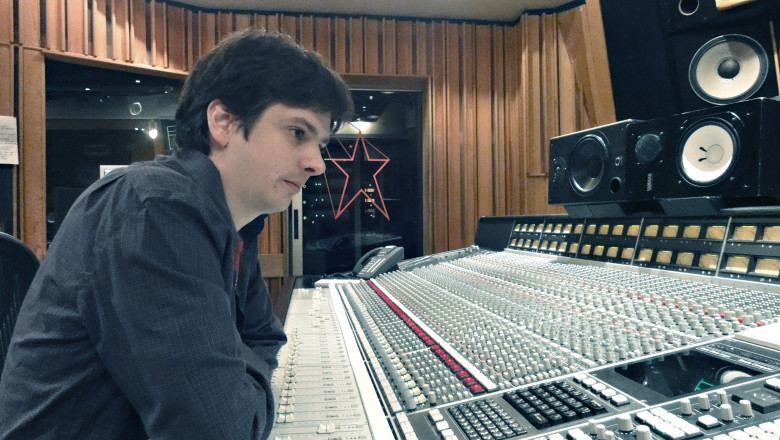 One of the features of Nicolas mixes is the punch, rock-like sounding drums, and very spatial. A true talent. 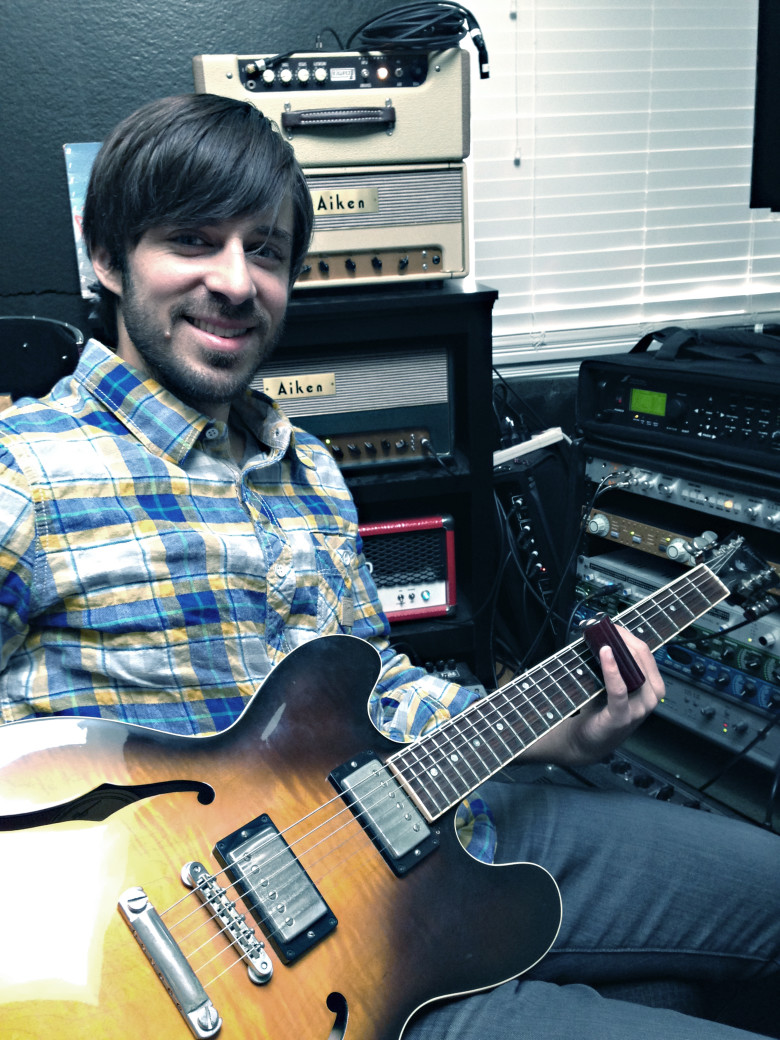 Thanks to Andrew’s great creativity we’ve been experimenting on different types of sounds and arrangements using vintage as well as modern gear. 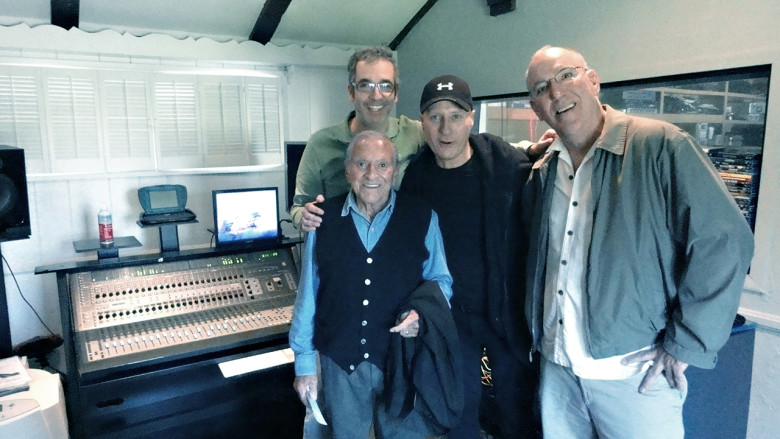 Jazz at its finest

And big thanks to sound engineer Davis Jones!

"L.A. Music Sessions is not just a music production enterprise, it's a soul's place, where experience, talent and passion of extraordinary artistic and human latitudes converge. A planetary of the sound, that speaks the languages of the world, a unique idea of producing music, where one breathes the magic of the past and the challenges of the future.”

"The detail oriented style, as well as the indisputable creative artistry of the L.A. Music Sessions professional network, provided a music recording experience that went well beyond my expectations. Impressed!”

"Thanks to the L.A. Music Sessions' artistic talent, passion and professional management, music ideas are fully realized within budget and skillfully enhanced with the magic of the arrangements and sounds chosen."

"L.A. Music Sessions provided me with tracks for my songs with excellent results. Anytime I had questions or concerns, I always got the answers I needed, plus offered valuable alternative options which made the process run so smooth. If you need any professional session work done for your music to bring it to the next level, I highly recommend contacting L.A. Music Sessions."

Get in touch with us for a free quote

Locate us on Map
This site uses cookies: Find out more.